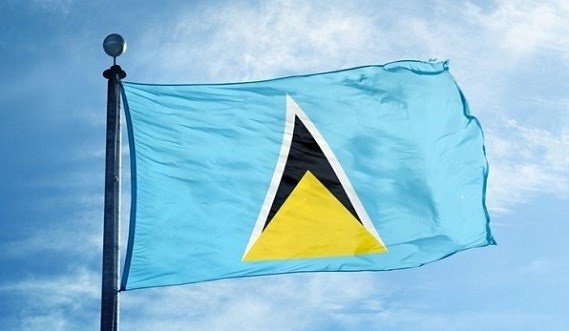 Look no further if you are seeking some facts about St Lucia before you set off on your vacation. The shape of the National Flag of St Lucia is the symbol of our world heritage site, the Pitons.  The colours were chosen as the following representations:   Blue - The sky and the surrounding seas.  Gold - The endless sunshine and the island's richness.  The black and white colours -  Our mixed culture; our people.The National Flag of St Lucia was designed by our own Sir Dunstan St.Omer.  The occasion was for the Island's independence from Great Britain on February 22nd 1979.

Where is St Lucia

Back in the 80's and the early 90's the question that I was often asked while I lived in the UK was, "Where is St Lucia?" The reason why this question was so common was, the tiny Island was not widely known like the neighbouring Islands of Barbados and Jamaica.  Saint Lucia is located along the eastern side in the Caribbean sea.  The Island sits between St Vincent's northern coast, Martinique south and north western coast of Barbados.   St Lucia also have an Atlantic coastline from the Northeast / East of the Island down to the South / Southwest coast.

Generally St Lucia weather conditions are very favourable, hovering between 26 and 29° C or 79 - 83° F.  Fortunately we are located in a hemisphere where we are able to enjoy the constant flow of cool tropical breeze. Our rain / hurricane season starts in July and ends in November.  Our most recent devastating hurricane was in 2010 when hurricane Tomas caused much damage to the Island.  The coolest months are December and January. Regrettably, we too have in the recent past been experiencing some changes in our weather patterns.

Hewanorra International Airport (Code UVF) is the largest of the two airports in St Lucia.  As the name suggests, the airport services all international flights in and out of the Island.  The airport is located in Beane Field which is in the southern town of Vieux-fort.

Beane Field Airport as it was previously known, was built during the Second World War for military purposes by the Americans.  The base was refurbished and converted into a commercial port after the war was over.

The journey from Hewanorra International Airport to the North of St Lucia is about ninety minutes.  If you are traveling to our location in the East, the journey time is much reduced to fifteen to twenty minutes maximum.  The Journey to the West Coast of the Island is approximately 0ne hour.

The second, and the smallest of the two airports is George F L Charles, formerly known as Vigie Airport. It is located in the Vigie area of the Capital City of Castries.  The port is only capable of servicing smaller aircrafts from within the Caribbean.

Because of the geographic location, there is no prospect of developing this port to accommodate larger aircrafts.   The airport was renamed G F L Charles in 1997 as an honour to Sir George Frederick Lawrence Charles.

St Lucia is a former British colony and it remains a member of the British Commonwealth of Nations even after it gained its independence on 22nd February 1979.  Not surprising, our parliamentary system of government is very much aligned to that of the British model whereby Queen Elizabeth 11 remains our head of state.

As her representative, the Queen appoints a Governor General upon the recommendation of the Island's Prime Minister.  Constitutionally, general elections must be held within a five year term however, elections are usually held just over four years.  The Island has for the longest while operated politically under a two party system.  The chances of any third party making a breakthrough is virtually zero; many have tried and failed.

The two political parties are The Saint Lucia Labour Party founded by George F L Charles.  The party is currently led by Philip J Pierre who is now in opposition. The Labour party operates under a red banner and its ideology is more in tuned with social democracy and embraces a centre left position.

The united Workers Party (UWP) which was borne out of the St Labour party and first led by Sir John Compton.  The party is currently led by the Prime Minister The Honourable Allen Chastanet.   The UWP is a party that is more aligned to the middle class; conservatism and embraces a centre right position.

Allen Chastanet won the 2016 general elections capturing eleven out of the seventeen parliamentary constituencies. (Saint Lucia is dived into ten districts) Allen Chastanet took over from the then leader and Prime Minister Dr Kenny D Anthony who previously served as Prime Minister for three terms.

The Economy Of St Lucia

Until very recent times, agriculture served as the backbone to the economy of St Lucia.  The richness of our soil combined with the near perfect climate gives us the opportunity for crop diversification.

Our leading crop was sugar cane and there were plantations in various rural districts around the Island. The largest fields were towards the west coast area of Roseau. (Pronounced RO-ZO) where the sugar mill was also located. The crop was used for the production of sugar and rum.  The sugar cane crop eventually collapsed and during the 1950 the “Green Gold”; the production of bananas evolved.

The production of bananas continued to flourish and in the early 1990s export levels mainly to the United Kingdom reached its peak. It was during that period the new name, “Green Gold” was assigned to the fruit. It was called green gold because the entire Island benefited tremendously from the export of bananas. Saint Lucia was traditionally known to be the largest exporter of bananas in the Windward Island. Employment in the farming industry was at its highest and our economy was the most advanced in the eastern Caribbean.  We continued to enjoy prosperity and the tangible benefits were inescapable throughout the ten districts.

The rewards that St Lucians enjoyed included the affordability of higher education for their children; in many instances up to university level.  People moved away from the common ramshackle homes to very decent structures. Many small businesses sprang out in the communities and most important of all, our government was able to build up the Islands infrastructure.  There was pipe-borne water and electricity in almost every home.  New roads were being constructed, schools and other important amenities were in every community.  In general, the notably increased standard of living for most St Lucians had derived from the banana industry.

The importance of the crop to the Island’s economy could not have been understated.  However, as the saying goes, all good things come to an end.  Sadly, the industry was not immune to external / global events.  In the face of Globalization and stiff competition the decline of the banana industry was inevitable.  An alternative to bananas had to be found for the survival of our nation.  Tourism was the alternative.

St Lucia Tourism started to evolve during the late 1990s when the banana industry was on the verge of collapse. Thankfully, the industry have grown steadily over the years and have now become the driving force of the nation's economy.  Our tropical weather, amazing scenery, our geographic location, and our many beaches; our greatest blessings, have given us the leading edge in the business.  The number of visitors to our shores have continued to increase.

Our tiny Island has much to offer and as a people we are collectively working to secure and maintain our share of the very competitive tourism market.  We have made good strides in doing so and the island has become one of the most popular destinations in the Caribbean.  The unspoilt landscape and remarkable terrain of the island is one to be envied.  The uniqueness of this very beautiful Island have been realized. The many landmarks and historical sites which includes the world's only drive-in volcano; the Soufriere Sulphur Springs. The majestic Pitons, which is also designated a World Heritage Site is one that cannot be excluded from your excursions upon your visit to St Lucia. And of course there is our local cuisine!

The entertainment and the “Lucian” culture are all experiences to be had. The countless activities and events taking place on the Island, provides the opportunity to keep you occupied.

Now that we have given you some facts about st lucia we look forward to welcoming you, and assist in making your St Lucia vacation a resounding success.

Thank you for your interest in our beautiful Island.  We look forward to welcoming you at Gravills Vacation Rental.

Loading...
Upps!
You're running a web browser we don't fully support. Please upgrade it for a better experience.
Our site works best with Google Chrome.
How to upgrade the browser